Among the many things Gustavo Petro wants to change as Colombia’s next president is his country’s fractured relationship with Venezuela — its most important neighbour but for years a bitter political foe.

The two countries have been on different trajectories since Hugo Chavéz took power in 1999 and launched his “Bolivarian socialist revolution”, an ideology maintained by the current authoritarian regime of Nicolás Maduro.

With Petro having been elected in June as Colombia’s most leftwing president, there has never been a better time to improve ties with Caracas, analysts say. But doing so will not be easy: Petro will face pressure from the Colombian right, certain forces within Venezuela and the US to hold Maduro’s regime to account for human rights abuses and undermining democracy.

“The next four years with Petro in power certainly have the potential to be the closest that Venezuela and Colombia have had in recent memory,” said Geoff Ramsey, director for Venezuela at the Washington Office on Latin America, a non-governmental organisation. “There are very clear reasons for Colombia to restore relations with Venezuela.”

“However, the challenge for Petro will be to do so in a way that doesn’t normalise a dictatorship,” he added.

Petro has said he wants to reopen the long and often lawless border between the two countries, something Maduro also wants. To do so, however, the Colombian president will have to contend with powerful armed groups on both sides of it.

There has also been a huge recent influx of migrants. Millions of Venezuelans have poured into Colombia, escaping economic collapse in their homeland. About 1.8mn remain, and many say they will not go home until Maduro is gone.

Historically, Colombia and Venezuela have enjoyed close ties. They were once part of the same country, Gran Colombia, covering a vast swath of northern South America. Colombia’s outgoing president Iván Duque often refers to them as “Siamese twins”.

But at the turn of the century, the countries went in radically different directions ideologically. Three years after Chavéz came to power, Colombia elected the hawkish rightwing president Álvaro Uribe, who cracked down on leftwing guerrilla groups that had Chavez’s support.

The two decades since then have been marked by sabre-rattling, border closures, insults and frequent lapses in diplomatic relations. In 2019 things came to a head when Duque and the US administration of Donald Trump recognised Venezuelan opposition leader Juan Guaidó as his nation’s legitimate interim leader, claiming Maduro had stolen power.

Maduro was furious and severed diplomatic ties with Bogotá. They have not been restored. When the coronavirus pandemic struck, the border between the countries was closed. Although it is porous and people cross it by foot, it is shut to vehicular traffic.

“Our recent history is one of differences, dismissive insults and breakdowns in relations,” said Félix Arellano, an expert on international relations at the Central University of Venezuela.

Petro, who will assume office on August 7, says reopening the border will not only help people who live along it but also ensure Venezuelan migrants, who often pay armed gangs to guarantee their safe passage, can enter Colombia legally. The border is 2,200km long — the distance from London to Athens — and runs through dense jungle for much of its length.

“From a humanitarian, security and economic perspective the closure of the border has been a disaster,” said Bram Ebus, a consultant for the International Crisis Group in Bogotá and an expert on the border area. “It’s pushed migrants in the direction of criminal groups.”

Ebus said some of those groups, particularly Colombia’s largest extant Marxist rebel grouping, the Army of National Liberation (ELN), had grown stronger during the pandemic.

Analysts said some of those groups were protected by the Maduro regime and the Venezuelan armed forces. If Petro tries to crack down on them — he recently said he wanted to “go after, corner and displace them” — it could bring his government into conflict with Caracas.

“Combating organised crime will be very difficult for Petro,” Ebus said. “There are tacit alliances between Caracas and non-state armed groups from Colombia operating inside Venezuelan territory.”

Petro also wants to restore diplomatic relations, as does Maduro, who is anxious for international recognition. In a break with the Duque administration, the new Colombian president will not recognise Guaidó as Venezuela’s leader.

Restoring relations might eventually mean ambassadors from the countries in each other’s capitals but, at least in the beginning, it is likely to mean consular relations only.

“It would be a mistake to exchange ambassadors overnight,” said Ramsey at the Washington Office on Latin America. “There’s a fine line between engaging with the de facto authorities in Caracas and normalising authoritarianism.”

Petro also says he wants to restore commerce with Venezuela. The countries used to have vibrant cross-border trade but it has plummeted as Venezuela’s economy has imploded. Venezuela now accounts for less than 1 per cent of Colombia’s official exports, although all sorts of goods, legal and otherwise, are carried across the border in both directions by smugglers.

The US has been closely watching the potential detente. Some analysts say Petro might help repair relations between Washington and Caracas, which have barely evolved since the election of Joe Biden, who inherited Trump’s “maximum pressure” strategy designed to oust Maduro. Venezuela is under tough US sanctions, and Washington has no embassy in Caracas. Instead, it maintains a proxy embassy in Bogotá.

“Petro could be an intermediary for the relationship between the US and Venezuela, given that Colombia has traditionally been a close ally of the US and, ideologically, Petro has greater affinity with Maduro than Duque does,” said Daniela Cuellar, senior consultant at business management firm FTI Consulting in Bogotá. 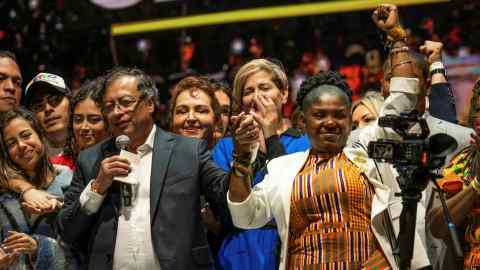 In Caracas, Arellano at the Central University of Venezuela said he had been struck by Petro’s various statements on Venezuela since he won the presidency on June 19. The former urban guerrilla, who was an admirer of Chávez, has openly criticised the Maduro regime and called for the release of political prisoners in Venezuela. When Duque insisted Maduro would not be invited to next month’s presidential handover in Bogotá, Petro acquiesced, describing the decision as “prudent”.

He has, however, already spoken to Maduro by phone and insists the two countries need to press the reset button.

“Petro is conscious that it’s not going to be easy to develop a fluid relationship with Venezuela because there are so many fundamental problems to address,” Arellano said. “But, nevertheless, I think he’s going to try.”

Mon Jul 18 , 2022
U.S. Treasury Secretary Janet Yellen known as out Russian officers attending the G20 conference in Indonesia, telling them that they have been contributing to the human and financial misery brought about by the Kremlin’s invasion of Ukraine. Yellen immediately resolved Russian finance officials Friday community time during her speech at […]