When it comes to personal finance apps, there’s debate about whether the app from PayPal Holdings (NASDAQ: PYPL) is better than Cash App from Block (NYSE: SQ) or vice versa. They both certainly have their supporters.

However, personal preferences for PayPal or Cash App are anecdotal, and investors should avoid anecdotes, relying instead on more general consumer trends. That’s why watching overall app downloads is useful. And right now, PayPal — not Cash App — is leading the way in downloads by a wide margin.

Why PayPal is winning global downloads

Third-party analytics company Apptopia recently released a list of the top finance and banking apps by downloads in the first half of 2022. At the top of the list was PayPal, with 49 million downloads. Cash App was a distant fourth place with only 35 million global downloads.

Some investors might be surprised by this data, considering PayPal appears to be struggling to gain more users. At the end of the first quarter of 2022, it had 429 million active accounts, which is massive. But it only expects to add 10 million net new accounts for 2022 as a whole. This forecast is down from the start of the year when it was expecting to add 15 million to 20 million net new accounts in 2022.

Lowering its active account guidance is one of the reasons PayPal stock has fallen over 70% from its high. Investors fear its growth is hitting the ceiling. However, Apptopia’s data is encouraging. Owning the most-downloaded fintech app in the world certainly counts for something.

PayPal investors should be encouraged. However, Block investors shouldn’t be discouraged at all because there’s a simple reason why PayPal is trouncing Cash App in the global competition: Cash App isn’t a global app. Roughly 99% of Cash App downloads come from U.S. users. And according to the same Apptopia report, Cash App is dominating the U.S. market.

Cash App has enjoyed 34 million downloads in the U.S. so far in 2022. This is twice as many as PayPal in second place.

Simply put, PayPal is beating Cash App in global downloads because Cash App has barely started to expand internationally. Block management plans to remedy this soon, which could greatly narrow the download gap between these two apps.

However, even with Block’s looming international expansion, I still believe PayPal is a great stock to buy now. Here’s why.

What the market is forgetting about PayPal

PayPal’s growth is admittedly slowing. For perspective, it had 9.8 million net new accounts in the fourth quarter of 2021 alone, which is about what it expects to add in all of 2022. However, the company is still growing accounts, and those accounts are increasingly more active.

In Q1, trailing-12-month transactions per active PayPal account hit an all-time high of 47 — up 11% year over year and up 3.5% from the fourth quarter. In other words, people are using PayPal’s services more frequently, and that’s a good sign for the health of the business.

PayPal takes a small percentage of transactions. And as accounts and transactions grow, this incremental revenue helps grow the company’s free cash flow (FCF). As of Q1, its FCF margin was 16%. In other words, for every $100 of revenue, PayPal had $16 in FCF.

PayPal expects $5 billion in FCF in 2022 and has already generated over $1 billion of this. Now it’s the duty of PayPal’s management to responsibly allocate this money.

PayPal’s management has historically done two things. First, it acquires other companies, like when it acquired Honey for $4 billion in January 2020. Second, it repurchases shares to increase shareholder value. And this is where things could get interesting for PayPal over the next year, in my opinion.

As already mentioned, PayPal’s stock is down more than 70% from its high. From 2019 through 2021, management used over $6 billion to repurchase shares. The average price-to-sales (P/S) ratio during this time was a sky-high 37. 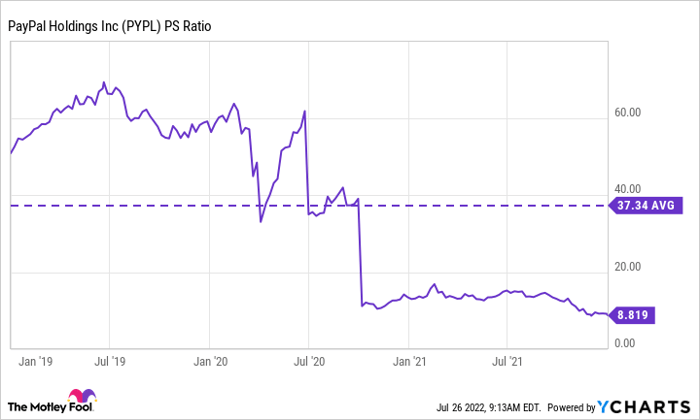 With a P/S ratio of just 3.7, PayPal now trades at its cheapest valuation ever. In other words, management will be able to buy back more shares than it otherwise could if valuations were still high.

For traders, PayPal’s 70% drop is a problem. However, it’s a blessing in disguise for buy-and-hold investors. As we’ve seen, metrics like downloads and transactions per user suggest the business is still very healthy. And a healthy business generates tons of cash.

PayPal’s repurchasing power will go farther now with the stock trading at a cheaper valuation. I expect PayPal’s management will recognize this and accelerate its repurchases in the coming year. And if it does, this will deliver a welcome boost to intrinsic shareholder value for those willing to hold through this downturn.

10 stocks we like better than PayPal Holdings
When our award-winning analyst team has a stock tip, it can pay to listen. After all, the newsletter they have run for over a decade, Motley Fool Stock Advisor, has tripled the market.*

They just revealed what they believe are the ten best stocks for investors to buy right now… and PayPal Holdings wasn’t one of them! That’s right — they think these 10 stocks are even better buys.

Mon Aug 8 , 2022
You put a great deal of work into bringing end users to the internet site, but they go away devoid of any conversion. It disappoints you as the whole efforts and resources drain out with no returns. Your website style and design has a enormous impact in making the end […]